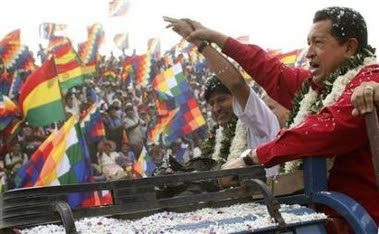 World oil prices are headed for $100 per barrel, Venezuelan President Hugo Chavez predicted on Saturday, and said he will cut supplies to the United States if the U.S. government "attacks" the South American nation again.

"I've always said that oil prices are headed straight to $100 per barrel," he said during a televised speech. "We should prepare ourselves for those prices of one hundred dollars."

Chavez said high oil prices were the sign of a "global crisis" in energy caused by voracious consumption that has vastly reduced available oil reserves.

Chavez has accused the United States of plotting a bungled coup that ousted him for two days in 2002, though Washington denies the accusations, and has repeatedly made conditional threats to cut off oil sales to the United States that historically account for 12 to 15 percent of U.S. imports.

"No one should think that we're going to stop sending oil to the United States, no -- unless they attack us again," Chavez said during a speech to leaders of Caribbean nations meeting in Caracas for an energy summit.

Venezuela hosted the Caribbean leaders on Saturday who had come for the third meeting of the Petrocaribe accord, an agreement Venezuela launched in 2005 to provide oil and fuel on advantageous terms to Caribbean countries.

Participants such as Jamaica and the Dominican Republic are offered soft financing terms and the possibility to pay their bills in-kind with products like bananas and nutmeg.