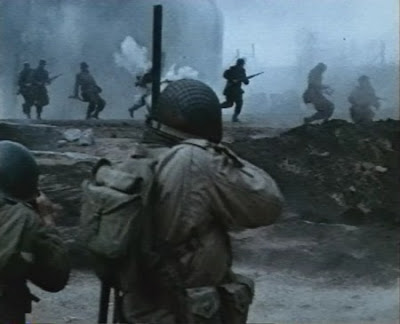 " ... Members of a neo-Nazi organization have joined a British group of war re-enactors... The Second Battle Group ... has appeared in movies like Steven Spielberg’s 'Saving Private Ryan.' ... ”

Members of a neo-Nazi organization have joined a British group of war re-enactors who specialize in playing World War II Germans, the BBC reports.

A film crew for the BBC show "Panorama" got tape of members of the Second Battle Group complaining about Muslims and blacks. Some claim to be members of Blood and Honor, a group that has adopted Nazi racial ideology.

The Second Battle Group, formed almost 30 years ago, has appeared in movies like Steven Spielberg’s “Saving Private Ryan.” The group’s Web site says it aims “to portray the fighting German Waffen SS soldier of WWII as accurately as possible.”

The BBC crew followed the group during a recent show in Kent, The (London) Telegraph reported. One man was filmed saying he would join the Waffen SS if it existed now.

“I believe we should be sorting these Muslims out," he said.

Another man, a German, used a racial epithet for blacks and said, “Our blood is no longer fresh.” (c) UPI

http://www.postchronicle.com/news/breakingnews/article_21299735.shtml
Posted by Alex Constantine at 9:36 AM