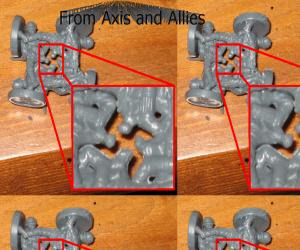 It Must have been the most gruesome board game in the world.

German children were given points to blow up cities across the UK in a bizarre Nazi board game.

And for hitting Aberdeen - the most bombed city in Scotland during World War 2 - they scored 60 points.

Bombers Over England was a twisted version of a pinball game.

The only locations to bomb worth more than the Granite City were London, at 100 points, and Edinburgh at 70 points. Landing on Glasgow and Dundee yielded zero points.

Honorary colonel of the Gordon Highlanders Ian Lakin was astounded to hear of the board game.

He said: "I have never come across anything like this before.

"And I am a bit surprised at the strategic significance placed on Aberdeen.

"I would have thought places like Clydeside, for the shipbuilding, would have been higher on the list than Aberdeen although it was important in terms of having the airport at Dyce.

"It is very interesting to think what was going through the head of the person who made this game."

The game and two others based on Gunther Prien - the war commander who sunk the HMS Royal George - belong to a German collector.

He was unable to sell them in his own country due to local laws so they will go under the hammer in England this week when they are expected to fetch up to £300 each.

London, Aug 20: Hitler's decision to make military training compulsory for all German school children of Aryan descent, especially boys, was one of the reasons for the Third Reich's stupendous success during the early phase of WWII.

By the time the war began in 1939, an eighteen-year-old Wehrmacht soldier had six years of military training (starting from 1933, when Adolf Hitler became Chancellor).

But the Nazis, it seems, wanted to indoctrinate German children as young as four with the art and science of war.

So when the Luftwaffe bomber pilots rained down bombs on London and other English cities during the Blitz of 1940, children as young as four, back home in Germany, tried their hands at a version of bagatelle named 'Bombers over England', where they tried to blow up settlements by firing a spring-driven ball on to a board featuring a map of Britain and the tip of Northern Europe.

Players were awarded a maximum 100 points for landing on London, while Liverpool was worth 40. However, they were penalised 80 points if they hit allies such as Brussels and Amsterdam.

Historian Richard Westwood-Brookes said the game must have been produced early in the war, as France is not marked as under German control.

"It is a very uncomfortable feeling, thinking of a group of German children back in 1940 getting excited at scoring 100 points for destroying London when the grim realities of the Blitz were taking place. It is unlikely any other examples of this game exist," said Westwood-Brookes.

According to the Daily Mail, children also played a version of 'snakes and ladders' in which battleships sailed from Germany to England and back blowing up ships and targets along the way.

Children also played another game which involved moving a plane piece over the board and flicking off a paratrooper, with points on offer for where he lands, Westwood-Brookes said.

Inspired by tiddlywinks, a player flicked coloured 'V-1 rockets' into a game board boasting targets of Hitler and other top Nazi officials.

"It is a most unbelievable act of courage on the part of its makers. It is hardly the sort of thing you would want to be found with if the Gestapo came calling," Westwood-Brookes said.

The games, all from a German's primate collection are being auctioned in Shropshire this week, since the sale of Nazi memorabilia is forbidden in Germany.

According to the paper, the games will go under the hammer at Mullock's auctioneers in Ludlow on Thursday and are expected to fetch between 100 and 300 pounds each.

http://www.dailyindia.com/show/167032.php/When-German-kids-bombed-England-during-WW2!
Posted by Alex Constantine at 11:24 AM