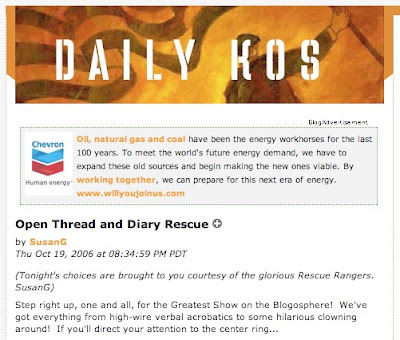 [What's wrong with this picture?]

Is it possible Markos Alberto Moulitsas Zúñiga, leader of the "Kossaks," that is to say followers and fawners of the Daily Kos, is a CIA operative? Francis Holland, posting on the My Left Wing messageboard, details Moulitsas’ relationship with the CIA:

"Markos Moulitsas Zúniga, owner of the DailyKos website, now admits that he spent six months in the employ of the US Central Intelligence Agency in 2001," writes Holland. "In a one-hour interview on June 2, 2006 at the Commonwealth Club, Moulitsas, also known as 'Kos,’ admitted that he was a CIA employee and would have 'no problem working for them’ in the present."

"I applied to the CIA and I went all the way to the end, I mean it was to the point where I was going to sign papers to become Clandestine Services," Moulitsas admits in the interview. "And it was at that point that the Howard Dean campaign took off and I had to make a decision whether I was gonna kinda join the Howard Dean campaign, that whole process, or was I was going to become a spy. (Laughter in the audience.) It was going to be a tough decision at first, but then the CIA insisted that if, if I joined that, they’d want me to do the first duty assignment in Washington, DC, and I hate Washington, DC. Six years in Washington, DC [inaudible] that makes the decision a lot easier."

"This is a very liberal institution. And in a lot of ways, it really does attract people who want to make a better, you know, want to make the world a better place…. Of course, they’ve got their Dirty Ops and this and that, right but as an institution itself the CIA is really interested in stable world. That’s what they’re interested in. And stable worlds aren’t created by destabilizing regimes and creating wars…. I don’t think it’s a very partisan thing to want a stable world. And even if you’re protecting American interests, I mean that can get ugly at times, but generally speaking I think their hearts in the right place. As an organization their heart is in the right place. I’ve never had any problem with the CIA. I’d have no problem working for them ... "

Not much difference between national socialists and communists
Wasn't the term "progressive" popularized by the Soviet Politbureau under Stalin?
Same people were behind both.

Look into how much the OSS, CIA, MI5 and MI6 and French Intel were infiltrated by Sovs, and they might as well be subsidiaries.

An idea that has you is "ideology"
And,nobody went broke underestimating the gullibility of the American public.