She's the very definition of my kind of woman. The wraiths of the Apocalypse may have dispatched their horsemen - but I'm in love ... - AC 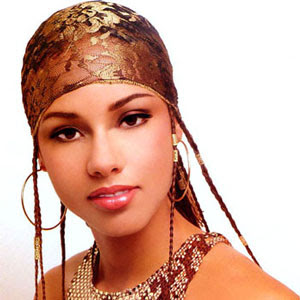 " ... Alicia Keys recently alluded to the government’s involvement in “Gangster Rap” and the deaths of Biggie and Tupac. ... The Nazi party, not just Hitler, killed millions of Jews for mostly economic reasons. ... Most of them didn’t believe that they were going to be exterminated. They didn’t believe the conspiracy theories, (but) enlightenment does not need White approval ... "

Genocide refers to the systematic destruction of a race of people in part or in whole. Too many Black people are unaware of the fact that such a plan is currently being carried out either directly through violent assaults by the police or indirectly by benign neglect.

Alicia Keys recently alluded to the government’s involvement in “Gangster Rap” and the deaths of Biggie and Tupac. Some so-called Black people started talking about how ridiculous it was for Alicia Keys to be thinking.

“She needs to shut up and just sing and play the piano.” No, what needs to happen is you need to “open up” your mind and start to think. For years now the government has been engaged in the science of psycholinguistics designed to control behavior. I know that it exists because I am one of a few Black psychologists who have been trained in psycholinguistic programming.

Psycholinguistics is defined as the study of the relationship between language and behavior. Language includes images, signs, symbols and gestures. During the several days of training we were given homework that included programming the waitresses who served us that evening. The media has been scientifically used to control everything from the food you eat, the car you buy or the person you vote for. Who are the people who sit on corporate boards and determine what movies and other media get funded or made?

Genocide refers to the systematic destruction of a race of people in part or in whole. Too many Black people are unaware of the fact that such a plan is currently being carried out either directly through violent assaults by the police or indirectly by benign neglect. Benign neglect includes the fact that many Black children are not being prepared for a high quality of life, due to their being either uneducated or undereducated. Millions of Black youth are dropping out of school. These are Black youngsters who are the victims of mentacide. Mentacide is the destruction of their minds. Black people who are being denied appropriate health care are being physically destroyed. The media are being used to spiritually and morally destroy Black youth. The fact is somebody’s trying to kill you.

Certainly not all White people are out to get us. However, some of us are too busy forgiving a system of White Supremacy that has been assaulting us since we were kidnapped from Africa. Go to Ghana, visit the slave castles and see the “Star of David” carved into the doors, indicating the presence of Jews. Then think about who is guilty and who is innocent. Certainly not all Jews owned slave ships but many of the elitists Jews did own slave ships. If you have forgotten the screams of our ancestors who were brutally and savagely beaten, raped and separated from their loved ones then try to remember the more recent images of the Katrina victims.

Look at what America did to the Indians. The reasons were economic. Rev. Jeremiah Wright accused America of dropping the atomic bomb, a weapon of mass destruction on the Japanese cities of Hiroshima and Nagasaki, killing 110,000 people. The bombs were dropped on August 6, 1945. By 1950 another 230,000 Japanese had died from the effects of radiation. Of course America justified the act by claiming that it saved American lives. However, the real reason was economic. America is a capitalistic country that operates on the profit motive. Don’t be fooled. Everything is economic in America. The only reason our ancestors were brought to America was to insure an economic profit for the elite. Today Blacks, with the exception of a few, are costing America more than America is profiting off them. In addition, there are those who believe that unworthy people are sucking up too much of the planet’s oxygen and other resources. These folks are talking about a severe reduction in the world’s population.

Before you go into denial and claim that this is also happening to White people, let me remind you that the White elitists don’t care about the average White person either! Most White people are the descendants of Whites who were slaves both in Europe under feudalism—from the 9th to the15th century and in colonial America. Most Whites were brought to America as slaves (indentured servants). These White slaves played a significant role in the formation of the original thirteen British colonies. The term indentured servant was used because White slaves were British subjects who had legal rights. Hence, they couldn’t be maintained as slaves for more than about seven years. Meanwhile, the White female slave and the Black African slave were bred to create light skinned slaves. The product of racial breeding could be sold at the auction as America’s prize commodity. They told you all the Indians ran away and the Whites were too weak to work. That’s a lie. The reason some of us are part Indian and some White folks are part Indian is because the slave owners were cross breeding Indians, Blacks and Whites who were all property of the slave masters.

Not all White people are prejudice against Blacks. Not all Germans killed Jews. However, the Nazi party, not just Hitler, killed millions of Jews for mostly economic reasons. Many Jews were blindly marched off to concentration camps and eventually to their death. Most of them didn’t believe that they were going to be exterminated. They didn’t believe the conspiracy theories. Black genocide is already taking place. There is a great deal of evidence that Black people are deteriorating mentally, physically, spiritually and morally. As a scientist, I ask why. Is it because we are genetically inferior, mentally impaired, morally defective or is there another possibility? If you wanted to destroy a race of people how would you do it? How about contaminating their food and water, contaminating their brains with destructive mind-altering drugs or sound waves, creating a virus that has no cure, creating conflicts and violence against each other, destroying their relationships, families and communities? If you had the assignment how would you carry out the plan?

White folks say it is only so if you can prove it. Where is the evidence of racism and genocide? African Psychology tells us that there are many things the enlightened mind has knowledge of. Such enlightenment does not need White approval. Perhaps Alicia Keys will earn her place along side Paul Robeson, Harry Belafonte, Bob Marley, Min. Louis Farrakhan and a host of musicians and entertainers, including Dick Gregory who are among the many enlightened Blacks that have influenced our minds. Are you absolutely sure that Alicia Keys has not struck a cord?

Also see: "The CIA's Creation of AIDS as an Ethnic Weapon (Fascist Connections to the Murder of John Kennedy, too) - Recommended Reading for Barrack "Oreo" Obama"
Posted by Alex Constantine at 3:13 PM

Alicia Keys didn't have to read any books of Alex Constantine to become enlightened about the assault against Black people in this country. We have been fighting mind controlled zombies assasins for decades, but whites don't seem to care to heed warnings if its coming from a black perspective. We have been plagued by our brothers coming of prisons after being turned into mind controlled killers by the CIA spook doctors like Dr. Louis J. West, Dr. James A. Hamiton of Stanford University, etc., and the likes of their black collaborators like Psychiatrist Dr. Isaac Slaughter, and psycholinquistic master Colston Westbrook. The only reason whites noticed Westbrook is because of the whites involved, Patty Hearst and SLA. Our brother Marcus Wayne Cheunalt was a Nazi-linked mind controlled assassin when he killed Mrs. Martin Luther King in 1974, and white american didn't seem to care. In May 1969, we captured a mind controlled brother sent in to assassinate either Stokely Carmichael or H.Rap Brown on Malcolm's Day at Merritt College. Some of the brothers imprisoned in the 1970's Zebra Murders are inocent. Most of the real zebra killers were mind controlled out of San Quentin. Get this, William Bryan was a witness to one of the zebra hits in San Francisco. Dr. William J. Bryan was the CIA contractor responsible for programming Sirhan Sirhan to be the patsy in the assassination of RFK. He may have been the programmer of the San Quentin Zebra Killers. One of the San Quentin mind controlled Zebra Assassins, Jesse Cooks, was caught in the act of an attempted assassination months before the majority of the S.F. Zebra hits began. They allowed the killings and assaults to continue unabatted for months to create world-wide illusions that we, Black Men, were Big Black Brutes. Far too many whites take the bait and continue to baited. Have you noticed? Real talented Black enterianers and musicians are falling and being disabled by the dozens, Donny Hattaway, Marvin Gaye, Whitley Houston, Bobby Brown, Harold Melvin, Teddy Pendergrass, James Brown, Sean and Gerald Levert,Big-E Smalls, Tupac, and list go on and on. Have you wondered what happened to the world respected Rhythm and Blues and Jazz Industries in this country. Is it a co-incidence that Britney Spears, and Disney characters like Hana Montana and High School Musical are leading the music industry in their absence? I don't think so. In Oakland, a real CIA satanic mind controller contractor, Hamaseh Kianfar 31 of San Rafael, was caught red-handed in programming a young 16 year old sister, Marylyn Webster, to be sleeper assassin. What shocked me was none of white mind control and no one bothered to show any interest in the case. Our young sister, Alicia Keys, is talented, beautiful and intelligent, and she didn't have to learn that we are under constant attack from Alex Constantine's books. I will admit in respect for the author that I have ready most of his books and appreciate his very valuable research and work, but when it comes to Jonestown, Freeway Killers, Zebra Killings and mind controlled brothers coming of America's prisons and armed forces programmed to kill, I wish there was more attention and contributions paid to what's coming from our people, the Grass Roots and the Black Perspective.