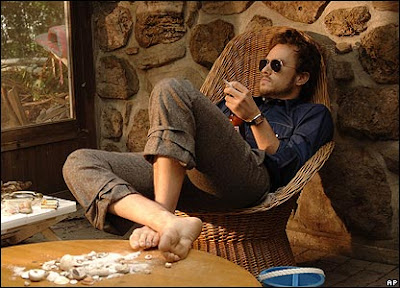 A new lawsuit claims Heath Ledger was set up by two photographers who secretly filmed the late actor taking cocaine in a Los Angeles hotel room.

In legal documents filed by an unnamed woman in Los Angeles Superior Court on Friday, two Splash News paparazzi stand accused of luring Ledger to her room at the Chateau Marmont hotel in January 2006.

Eric Munn and Darren Banks allegedly then gave cocaine to the actor while secretly videotaping him. Ledger, who had no idea they were photographers, also had some cocaine of his own, according to the lawsuit.

Ledger eventually spotted he was being filmed and allegedly became angry, at which point he was promised the tape would be destroyed.

It wasn't, and a segment of it was screened on US TV show Entertainment Tonight shortly after his death from an accidental prescription drugs overdose in January. The full tape was never aired after numerous celebrities pressured producers to drop the video.

The woman, listed as Jane Doe, refuses to reveal her identity for "fear of consequences and repercussions". The legal papers do, however, state she was working as a freelance reporter for People magazine and that she was "occasionally dating" Dunn at the time.

The woman, who People state has not worked for the magazine since last year, claims the videotape makes it appear as if she was taking cocaine.

http://breakingnews.iol.ie/entertainment/story.asp?j=252489604&p=z5z49x3yx
••••••
Question for the LAPD: Who was really in possession of illicit drugs, Ledger or the paparazzi who set him up?

Ledger is accused by the media of indulging in illegal drugs ... okay, he was known to have done this, and the court papers claim that he had some on him ... but we've seen that "Eric Munn and Darren Banks allegedly then gave cocaine to the actor while secretly videotaping him."

The paparazzi who set him up supplied the cocaine ...

The photographers who shot the Ledger video claimed that it was happenstance they found Ledger at the Chateau Marmont.

So if the coke in their room was not intended to set up Ledger for a photo sting ... what was it doing there? Is Ledger the focus of this scandal or the paparazzi who shoved drugs under his nose:

From Perth Now: "The Daily Telegraph understands Ledger had not been a specific target for the agency, with the two men assigned by management to hire a room at the Chateau Marmont and watch several celebrities who were staying there after the Screen Actors Guild Awards that night.

"The pair are believed to have been in a public area of the hotel when they spotted Ledger and befriended him - without disclosing they were journalists - and later invited him back to their room. ... "

The drugs turn up in the story here, along with acknowledgment that Splash News knew there were legal complications in releasing the Ledger video:

" ... Lawyers for the agency are understood to have advised that Ledger would have a strong case to sue - and would likely win a settlement worth millions - on the grounds of entrapment, as the reporter and photographer had invited him into their drug-filled hotel room. ... "
http://www.news.com.au/perthnow/story/0,21598,23147956-948,00.html

THE scandalous video of Heath Ledger talking about his drug habits was filmed as part of a controversial sting by paparazzi, who cashed in on the actor's tragic death.

The grainy video footage – in which a guilt-ridden Ledger confessed that he was a regular drug user – was allegedly recorded by a reporter and a photographer from LA-based, British-owned paparazzi agency Splash News.

Several independent sources told The Courier-Mail that the company's bosses had initially decided, on legal advice, in early 2006 against selling the footage.

" ... It was shortly after I arrived that company founder Kevin Smith and news editor Paul Tetley took me out for a quiet lunch and explained the importance of Jackson. Worldwide, he was still the biggest star in the world. It was Splash which had broken the allegations against the star back in 1993 and had led the way on the story ever since. It was important, for the agency's reputation, to continue that solid coverage. And to cover the trial properly the agency needed a single-point man. Reporter Martin Fricker used to be that expert ... Covering the celebrity trial of the century wasn't always a thriller, says Graeme Massie of Splash News, but it was an intriguing challenge for journalists - and a nice little earner for residentsew York office. ... "
http://www.pressgazette.co.uk/story.asp?storyCode=30917&sectioncode=1

Founded in 2000, SplashData is privately held and based in Silicon Valley, California.

"Prior to joining SplashData, Morgan was General Manager of Mobile Digital Media (MDM), a spin off of Palm, Inc. focused on retail sales of reference and entertainment software for mobile devices. At MDM, Morgan licensed content from software leaders such as Microsoft, Electronic Arts and Atari, developed versions for mobile platforms, and then distributed these titles through leading consumer electronics and office chains as well as online distributors like Handango and Motricity. Prior to MDM, Morgan worked as a business development executive at Palm, Inc., where he managed strategic partnerships with companies like AOL, Yahoo, and NTT DoCoMo. Before Palm, Morgan spent eight years at The Walt Disney Company in a series of roles of increasing responsibility. Morgan’s last position at Disney was Vice President of New Media and Business Development. Morgan holds both an MA degree and BA degree with Honors from Stanford University."
Posted by Alex Constantine at 9:53 PM