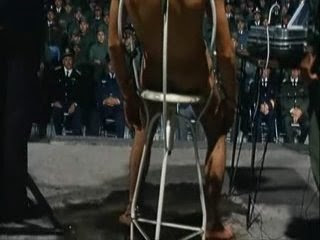 " ... His funeral was largely publicised by the U.S. media, and it was attended by, amongst others, David Eisenhower and Richard Nixon's secretary of state William Rogers. Frank Sinatra and Jerry Lewis held a benefit concert for his family in Richmond, Indiana. ... "

Daniel A. Mitrione (August 4, 1920–August 10, 1970) was an Italian-born American police officer, FBI agent and a United States government security advisor for the CIA in Latin America.

Mitrione was a police officer in Richmond, Indiana from 1945 to 1947 and joined the FBI in 1959. In 1960 he was assigned to State Department's International Cooperation Administration, going to South American countries to teach "advanced counterinsurgency techniques." A.J. Langguth, a former New York Times bureau chief in Saigon, claimed that Mitrione was among the US advisers teaching Brazilian police how much electric shock to apply to prisoners without killing them[1]. Langguth also claimed that older police officers were replaced "when the CIA and the U.S. police advisers had turned to harsher measures and sterner men."[2] and that under the new head of the U.S. Public Safety program in Uruguay, Dan Mitrione, the United States "introduced a system of nationwide identification cards, like those in Brazil… [and] torture had become routine at the Montevideo [police] jefatura." [3]
From 1960 to 1967, Mitrione worked with the Brazilian police, first in Belo Horizonte then in Rio de Janeiro. A trainer in torture classes given to Brazilian police in Belo Horizonte, he led "practical demonstrations" of torture techniques using prisoners and beggars taken off the streets. According to a former student, Mitrione has insisted, in agreement with the CIA manual, that effective torture was science. "The precise pain in the precise place, in the precise amount" was his motto. [taken from State of Shock by Naomi Klein.] He returned to the US in 1967 to share his experiences and expertise on "counterguerilla warfare" at the Agency for International Development (AID), in Washington D.C.. In 1969, Mitrione moved to Uruguay, again under the AID, to oversee the Office of Public Safety. Screenwriter Franco Solinas, a member of the Italian Communist Party, claims Mitrione was also in the Dominican Republic after the 1965 US intervention.[4]

In this period the Uruguayan government, lead by the Colorado Party, had its hands full with a collapsing economy, labor and student strikes, and the Tupamaros, a left-wing urban guerilla group. On the other hand, Washington feared a possible victory during the elections of the Frente Amplio, a left-wing coalition, on the model of the victory of the Unidad Popular government in Chile, led by Salvador Allende, in 1970. [5] The OPS had been helping the local police since 1965, providing them with weapons and training. It is claimed that torture had already been practiced since the 1960s, but Dan Mitrione was reportedly the man who made it routine.[6] He is quoted as having said once: "The precise pain, in the precise place, in the precise amount, for the desired effect." [7] Former Uruguayan police officials and CIA operatives claimed Mitrione had taught torture techniques to Uruguayan police in the cellar of his Montevideo home, including the use of electrical shocks delivered to his victims' mouths and genitals.[8] He also helped train foreign police agents in the United States in the context of the Cold War. It has been alleged that he used homeless people for training purposes, who were allegedly executed once they had served their purpose.[9]

As the use of torture grew and the tensions in Uruguay escalated, Mitrione was eventually kidnapped by the Tupamaros on July 31, 1970. They proceeded to interrogate him about his past and the intervention of the U.S. government in Latin American affairs. They also demanded the release of 150 political prisoners. The Uruguayan government, with U.S. backing, refused, and Mitrione was later found dead in a car, shot twice in the head and with no other visible signs of maltreatment (beyond the fact that, during the kidnapping, Mitrione had been shot in one shoulder -- for which he had evidently been treated while in captivity).

After being released from prison the leader of the Tupamaros, Raul Sendic, revealed that Mitrione had not been suspected of teaching torture techniques to the police. He had trained police in riot control and was targeted for kidnapping as retaliation for the deaths of student protestors. [10]

Mitrione was married and he had nine children. His funeral was largely publicised by the U.S. media, and it was attended by, amongst others, David Eisenhower and Richard Nixon's secretary of state William Rogers. Frank Sinatra and Jerry Lewis held a benefit concert for his family in Richmond, Indiana. Although he was characterized at his death as a man whose "devoted service to the cause of peaceful progress in an orderly world will remain as an example for free men everywhere" by White House spokesperson Ron Ziegler, and as a "a great humanitarian" by his daughter Linda, evidence of his secret activities which disproved this perception would later emerge, mostly through Cuban double agent Manuel Hevia Cosculluela.

One of his sons, Dan Mitrione Jr., also joined the FBI and later got involved in a scandal involving bribes, smuggling, and murder in a FBI drug investigation called Operation Airlift.[11] Many mysteries still surround Airlift, including the disappearance of Gary Weaver, a father of two who was last seen in the Bahamas.