Jimi Hendrix was Waterboarded to Death 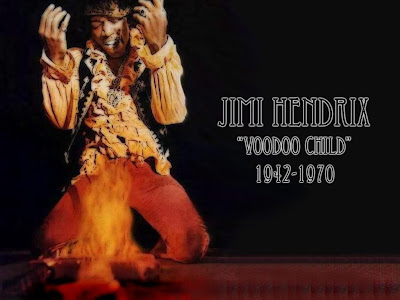 Since Hendrix died, I've repeatedly heard fans profess their admiration, even love, for him. If so, why ask no hard questions about his death? Why blame him for his own murder with the false claim that he "choked on his own vomit," or the long-defunct canard that he overdosed on heroin? Perhaps they don't admire him at all, but simply take from Hendrix, give nothing back. Could it be that Hendrix fans are Good Germans, too, laboring under the false assumption that they are free thinkers? My own perspective is that his fans are programmed peasants who admire themselves and could care less about Hendrix the man. In the past, I've been repeatedly attacked verbally by people who claim to respect the virtuoso deeply, personally ... for having researched his murder and cited relevant, unavoidable facts to support that conclusion. Excuse the heck out of me. It was political. It was homicide. Choke on it, those of you who cling to cruel cover stories - I'm right and the controlled press is wrong. - AC
Posted by Alex Constantine at 11:46 AM

I agree with AC on THE WAR ON ROCK AND ROLL.

This is an offshoot, or manifestation of what was called COINTELPRO, that was and still is SO EFFECTIVE IN NEUTRALIZING THE US CONSTITUTION and people who are subjectively hated by the radical right wing trash scum with badges.

Nobody understands...the cowardice of a punk whore police state THAT MUST DO IT'S DIRTIEST DEEDS SECRETLY to maintain a credibility that is unearned and undeserved.

Anybody who exposes this evil...ends up being harassed.

The secret harassment serves as evidence that SOMEWHERE THE TRUTH WAS SPOKEN and threatens the right wing scum.

Ask Alex Constantine about being harassed and fried with DEW.