Senators want Iraqis to Pay a Share of War Costs 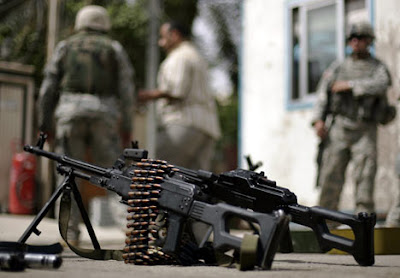 By J. Taylor Rushing
The Hill
04/17/08
[Submitted by JCProletariat]

A bipartisan group of senators is reviving a failed idea that would force the Iraqi government to use its own oil profits to help pay for the war.

GOP Sen. Susan Collins of Maine on Thursday joined Sens. Evan Bayh of Indiana and Ben Nelson of Nebraska in support of an idea the two Democrats first pushed in 2003.

The legislation could end up being attached to the Iraq war supplemental spending bill that lawmakers are expected to pass in the next two months.

Collins’s decision to cross the aisle followed two straight weeks of Senate testimony by Bush administration officials that indicated a new openness to such a concept. U.S. Ambassador to Iraq Ryan Cocker sent such a signal last week to the Senate’s Armed Services Committee, and federal Office of Management and Budget Director Jim Nussle said the same before the chamber’s Appropriations Committee on Wednesday.

In theory, the legislation would force the Iraqi government to use the money earned from rising oil profits to reimburse the U.S. for reconstruction costs. But it would also go beyond the 2003 bill by requiring that the oil profits also pay for Iraq’s security forces and U.S. fuel costs in Iraq.

“I believe this will garner overwhelming support in the Senate,” said Collins. “The Iraqis have reaped a windfall that should be tapped to pay more of the expenses of this war.”

The senators noted that oil prices have shot from $50 to $113 per barrel in the Iraqi government’s first years, bringing the country tens of billions of dollars in unexpected profits. Collins, Bayh and Nelson sent a letter outlining that point Thursday to Secretary of State Condoleezza Rice and Defense Secretary Robert Gates.

Bayh and Nelson launched a similar initiative in 2003 to restructure U.S. funds to Iraq as a loan, instead of a grant. That effort ultimately failed during House-Senate budget conferences, but Collins said the Bush administration has “evolved in its thinking” since then.

“This made sense five years ago when we first proposed it,” Bayh said. “Today it is compelling. This is a matter of common sense.”

Given the lateness of the appropriations season, the senators said the idea could be pursued as stand-alone legislation, added to the war supplemental spending bill or possibly included as part of the defense authorization bill due to be marked up by the Senate Armed Services Committee later this month.

“The supplemental appropriations bill is obviously the key target of ours,” Collins said.

Nelson said he planned to push the idea “as many different ways that we can, so we don’t have all the eggs in one basket.”

Other GOP senators indicated agreement to the concept, raising the possibility that the legislation would meet the chamber’s 60-vote threshold.

“Clearly we all want to grow the Iraqi government’s capacity to do these things,” said Sen. David Vitter (R-La.) “The discussion is about how to most effectively get there. But I certainly agree with the goal.”

During a Senate Appropriations Committee hearing Wednesday, Democrats slammed Nussle on the point, drawing a distinction between U.S. aid to impoverished countries and aid to Iraq.

“How do we explain to our constituents that here is a country with surpluses — something we don’t have — that’s making billions of dollars at our expense, and yet we’re paying for their reconstruction?” asked Sen. Daniel Inouye (D-Hawaii).

Nussle and Crocker both testified that Iraqi officials are already moving towards such responsibility, but that the country is still dependent on U.S. support as it continues to stabilize.

“I would be very interested in exploring a change in that direction, to have Iraq step up even to a greater extent than it is now and it has,” Nussle said Wednesday. “I would be open — and I believe the administration would be open — to that consideration.”

Rep. John Murtha (D-Pa.), who heads the House Appropriations Defense subcommittee, said the supplemental would clear both chambers by June 15, and recently ruled out the idea of the House splitting the emergency spending measure into separate bills for Iraq and Afghanistan.

Murtha declined to say whether the bill would be a two-year bill or would include add-ons to stimulate the economy, saying those decisions are “above my pay grade.”

Senate Majority Leader Harry Reid (D-Nev.) told reporters on Tuesday that splitting Iraq and Afghanistan was an idea Democratic leaders were evaluating. He said Thursday that both chambers were still negotiating strategy.

Manu Raju contributed to this story.

http://thehill.com/leading-the-news/senators-want-iraqis-to-pay-a-share-of-war-costs-2008-04-17.html
Posted by Alex Constantine at 11:42 AM

Interestingly, Evan Bayh was one of the first big name supporters of the Obama campaign.