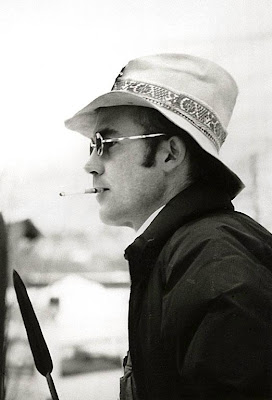 HE WAS A CROOK
by Hunter S. Thompson

Richard Nixon is gone now, and I am poorer for it. He was the real thing -- a political monster straight out of Grendel and a very dangerous enemy....

I have had my own bloody relationship with Nixon for many years, but I am not worried about it landing me in hell with him. I have already been there with that bastard.... Some of my best friends have hated Nixon all their lives. My mother hates Nixon, my son hates Nixon, I hate Nixon, and this hatred has brought us together.

PS: Yes, moving - this goes to show that politics does not have to be the world's bloodiest profession, that ideological polarity blinds us to interests that we share, that we are, in the end, bonded by simple emotion.

I've always said that the key to a successful marriage is allowing the finances of both partners to become as hopelessly entangled as possible. True, but simple, pure emotion can have the same effect. God bless (but not Nixon).