LODZ, Poland: For decades, Marek Edelman has found it painful to talk about his time as a leader in the ill-fated 1943 struggle by a handful of scrappy, poorly armed Jews in Warsaw to rise up against the Nazi's trained and equipped army.

If he ever returns to the traumatic memories of the Warsaw Ghetto uprising, it is only to bring a word of warning to the contemporary world.

"Man is evil: By nature, man is a beast," Edelman told The Associated Press during an interview in his home in the central city of Lodz.

He said people "have to be educated from childhood, from kindergarten, that there should be no hatred."

"They have to be shown that all people are the same, that skin color, race, religion don't matter," he said. "We have only one life and we must not murder each other. We see the sun only once."

Sixty-five years after the revolt, Edelman is reluctant to recall details of the three weeks he and some 220 other young Jews spent fighting the Germans — who had begun liquidating the ghetto, sending the remaining tens of thousands of residents to death camps.

"It was the first, most important and most spectacular" instance of Jewish armed resistance to the Nazi Holocaust, said Andrzej Zbikowski, head of the Jewish Historical Institute in Warsaw.

For years, Edelman — the last living commander of the struggle — and a handful of survivors have marked the April 19 anniversary of the uprising by laying flowers at the Monument to the Heroes of the Ghetto. He views the observances as "part of educating people and fighting genocide."

Edelman, who is 89 and uses a cane for support, also plans to visit Warsaw this year to lay flowers at the monument.

Jewish and Catholic prayers will be recited and wreaths lain at the monument, which stands in a barren square in the heart of the former ghetto, a 307-hectare (760-acre) section of the city that the Nazis walled off in November 1940, cramming in up to 400,000 Jews from across Poland in inhuman conditions.

Edelman, who still works as a doctor in a Lodz hospital, becomes emotional when he speaks of the struggle he helped launch.

"I remember them all — boys and girls — 220 all together, not too many to remember their faces, their names," he said.

The Nazis "wanted to destroy the people, and we fought to protect the people in the ghetto, to extend their life by a day or two or five."

They scraped together guns and ammunition that they and Polish resistance managed to smuggle in from the outside.

Still, "there weren't enough guns, ammunition. There was not enough food, but we were not starving. You can live for three weeks just on water and sugar," which they found in the homes of those deported to death camps, he said.

Edelman, then 24, took command of one of the revolt's three groups of fighters, all between the ages of 13 and 22. His brigade included 50 so-called "brush men" because their base was a brush factory.

They adopted hit-and-run tactics. With time, as supplies and forces began to run low, they resorted to attacks at night, for more safety.

"Every moment was difficult. It was two or three or 10 boys fighting with an army," Edelman said. "There were no easy moments."

"It lasted for three weeks, so this great German army could not cope so easily with those 220 boys and girls," he said with a grain of pride.

The uprising ended when its main leaders — rounded up by the Nazis — committed suicide on May 8, 1943. The Nazis then razed the ghetto, street by street.

About 40 surviving fighters escaped through the city's sewers and joined the Polish partisans.

"No one believed he would be saved," said Edelman. "We knew that the struggle was doomed, but it showed the world that there is resistance against the Nazis, that you can fight the Nazis."

Edelman and a few others remained in Warsaw to help coordinate and supply the Jewish resistance groups. Some fighters still live in Israel and Canada. Edelman is the last one in Poland.

Despite the ghetto struggle's ultimate failure, "it was worth it," Edelman said. "Even at the price of the fighters' lives." 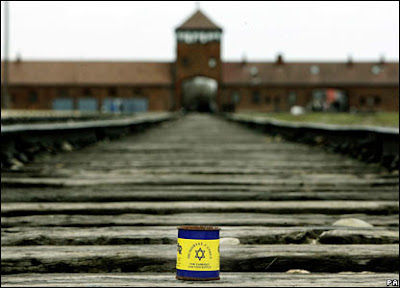 After the war, Edelman chose to remain in Poland, becoming a social and a democratic activist, and guardian of the ghetto fighters' memory.

"When you were responsible for the life of some 60,000 people, you don't leave and abandon the memory of them," he said.