Kristin "Billie" Davis is a graduate of St. Mary's College in San Francisco and is near finishing up a master's degree in psychology. Davis believes that she was targeted for arrest because she was Spitzer's personal procurer of bimbos. Her clientele is said to have included politicians and their contributors, name celebrities, film directors and household names in the sports biz. - AC 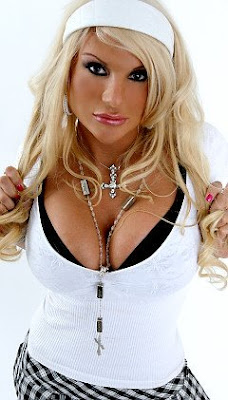 " ... She referred calls to her family's attorney, Mark Jay Heller of New York City. Heller, who has represented "Son of Sam" killer David Berkowitz, said that Davis was working in the financial markets, specifically hedge funds. ... "

FRESNO, Calif. -- The rest of the nation has shrugged off the call-girl scandal that brought down New York Gov. Eliot Spitzer last month, but New York hasn't. And now California's San Joaquin Valley has a reason to pay attention.

Her name is Kristin "Billie" Davis, 32, a former Fresno resident who has been capturing New York tabloid headlines as the buxom owner of a call-girl service that has been linked to the fallen governor. It's not clear whether Davis' relationship with Spitzer was personal or whether she merely set him up with women in a second prostitution ring that emerged after he resigned.

Davis is Kristin, not "Kristen," a working name of Ashley Alexandra Dupre, a woman with whom Spitzer is said to have had trysts for $4,000 a night.

Dupre's relationship with the governor led to his resignation.

Davis was described by the New York Post as "a busty bottle blonde who hails from a rough-and-tumble California trailer park. She has a reputation for hard-partying, shameless self-promotion and a rumored 10,000-name-long client list."

That description is a long way from The Willows, a gated and walled mobile home park with double-wide and manufactured homes, a duck pond, a community center and a swimming pool.

It borders a cow pasture.

Davis and her mother often took part in potluck dinners at the community center during the 1990s, said longtime Willows resident Ollie Stotts.

She recalled Kristin Davis as having "dishwater blonde" hair, not the platinum blond in the revealing photos the New York newspapers are publishing.

Neighbor Michael Beegle recalled Kristin two decades ago as a "tall, blonde girl" who befriended his daughter, who was about four years younger.

She received her bachelor's degree in management from St. Mary's College of Moraga in 2003 and is 30 units into a degree in psychology from a school in San Francisco, St. Mary's officials said.

After living in Southern California and the Bay Area, documents show she lived in Rhode Island briefly before moving to New York City about five years ago.

The escort services guaranteed that the women attained at least a college degree or were bilingual and in college.

Davis pleaded not guilty at her arraignment and is jailed in the women's facility at New York's Riker's Island.

Her bail is set at $2 million.

Her mother, Cheryl Smith of Fresno, said the family is going through "a difficult time" and would not comment further.

Heller, who has represented "Son of Sam" killer David Berkowitz, said that Davis was working in the financial markets, specifically hedge funds.

Heller described his client as a highly intelligent woman who was "never arrested in her life."

Court records in Fresno show no indications that she ever was arrested as an adult or even cited for speeding.

"We are waiting to see what evidence they have," Heller told The Bee, referring to New York prosecutors. "A lot of people get falsely accused, and that's what we are thinking here."