Berlusconi was a P-2 Lodge Brother/CIA, Gladio and Italian Terrorism Blamed on the Left 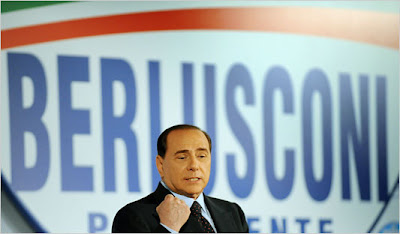 Italy's secret NATO structure/Daniele Ganser, security adviser to the Swiss Parliament, is the author of the book "NATO Geheimarmeen in Europe"

Ganser: A man with a history! In April 1981, the police discovered in Italy the existence of Freemasonic lodge Propaganda Due, or P-2 for short. That was a huge scandal. A parliamentary investigation revealed that P-2 was a secret anti-union with 962 members, led by Licio Gelli, who in turn closely cooperated with the United States. The P-2 operated beyond democratic control, as it were, a "state within a state secret". They were the most powerful Italians, including high-ranking officers of the secret services and the army, influential industrialists and bankers, incumbent and former ministers. Berlusconi also was a member of the P-2. History shows: The radiant Berlusconi also practices covert policy, and with success.

It wasn't only individuals in the underground network of P2 who were implicated.

In addition to the secretive P-2, there existed in Italy during the Cold War one of the CIA operations with the name Gladio. This was on behalf of NATO by the Italian military secret service SIFAR. They had weapons and explosives, storage and trained specialists who could carry out covert operations. Gladio and P-2 pursued, in consultation with Washington, the same goal: preventing the Italian Communists and Socialists from attaining power. Licio Gelli praised Gladio, and said that without this CIA operation, Italy would be taken over by the Communists.

Is the involvement of Gladio in terrorist attacks in Italy proved?

Officially, Gladio can only operated in a war action if Italy is occupied by the Soviet army. But de facto, Gladio is active in peace time, and it was the "enemy within", the Italian Communists, it fought. They were right-wing extremists. They led terrorist attacks, such as those of Peteano, 1972. The terrorist attacks were blamed on the Left, as the right-wing terrorist Vincenzo Vinciguerra confirmed. NATO, which declared today that they fight on terror in Afghanistan, will not talk about it. ...

http://www.neues-deutschland.de/artikel/127433.html
Posted by Alex Constantine at 11:41 AM