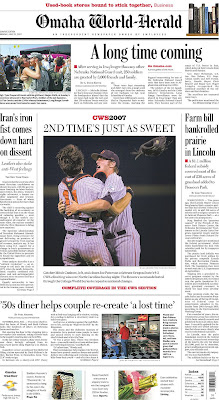 ... ES&S, the largest voting machine company in America, claims to have counted 56% of the vote in the last four presidential elections.

Again, it's owned by the ultra-conservative Omaha World-Herald Company, the McCarthy Group, and former owners of Business Records Corporation. ES&S was created from a merger between American Information Systems (AIS) and Business Records Corporation. Bob and Todd Urosevich founded AIS in the 1980's. Bob is now president of Diebold-Global, while brother Todd is a vice president at ES&S. Business Records Corp. was partially owned by Cronus, a company that seems to have a lot of connections to the notorious Hunt brothers from Texas, as well as other individuals and entities, including Rothschild, Inc.. Right wing Republicans Howard Ahmanson (who financed AIS) and Nelson Bunker Hunt have both heavily contributed to The Chalcedon Institute, an organization that mandates Christian "dominion" over the world..."

ES&S is now the largest voting machine company in America. One of its largest owners is the ultra-conservative Omaha World-Herald Company...

Two of the 28 main shareholders (John Gottschalk and A. William Kernen) are on the Board of Directors for the Omaha World-Herald and ES&S. In 1995, both went public with an effort to reoganize the company so that they could concentrate less on the newspaper and more on other World Company investments. The reorganization was blocked in a lawsuit, which later settled.
http://answers.google.com/answers/threadview?id=590896

It is generally outside the purview of this site to discuss these threats in any substantial way (three years ago, I wrote on the subject in a Daily Nebraskan column with little success). The time has come for someone to say, though, that the Omaha World-Herald has no place maintaining its investments in Election Systems & Software. Continuing their corporate relationship does great disservice not only to both companies but also to our democratic institutions. ... the most powerful voice in the Nebraska media and one of the most powerful forces in Nebraska politics.

[I]t can be said in many quarters of this state that if something isn't reported in the World-Herald it may as well not even have happened because it is the primary source of news for so many, with no other entity having anything close to its reach across the state.

That is a lot of power. That is a lot of responsibility - a responsibility the World-Herald does not live up to by maintaining part ownership in ES&S. ... What the World-Herald can be blamed for, however, is blurring an essential, protective line between reporting the news and making the news - not to mention, shaping the elections and literally deciding their outcome. No suggestion of impropriety or corruption is necessary to say that it does not serve the public good for a newspaper that already plays so great a part in Nebraska politics to step beyond reporting on elections to play a role - any role at all - in actually counting the ballots by which they are decided.
http://www.bradblog.com/?p=3819
Posted by Alex Constantine at 11:54 PM