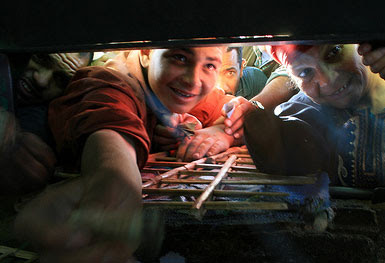 CARACAS (Reuters) - Soaring food prices are a "massacre" of the world's poor and are creating a global nutritional crisis, Venezuelan President Hugo Chavez said on Tuesday, calling it a sign that capitalism is in decline.

His comments came only hours after the United Nations' World Food Program called more expensive food a "silent tsunami" that threatens to plunge more than 100 million people on every continent into hunger.

"It is a true massacre what is happening in the world," Chavez said in a televised speech, citing U.N. statistics about deaths caused by hunger and malnourishment.

"The problem is not the production of food ... it is the economic, social and political model of the world. The capitalist model is in crisis."

The self-styled revolutionary and Cuba ally has won popular support by subsidizing food for the OPEC nation's poor majority, although his administration struggled last year to keep products such as milk and sugar on store shelves.

"Developed countries want to feed the cars of the rich with food -- this is the irrational world we live in today," Lage said, echoing Chavez's frequent accusations that Washington's promotion of biofuel is boosting prices of staples like corn.

Riots in poor Asian and African countries have followed steep rises in food prices caused by a range of factors including pricier fuel, bad weather and the conversion of land to grow crops for biofuel.