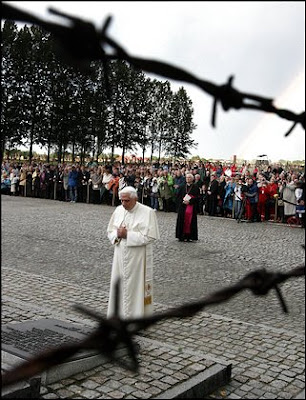 Bill Maher, true to form on his "Real Time" program on HBO on Friday, went on a tirade against Pope Benedict XVI and the Catholic Church, only days before the Pope’s visit to the U.S.. He stated that the Pope "used to be a Nazi" and compared him to a cult leader. He then went on to call the Church a "child-abusing religious cult" and "the Bear Stearns of organized pedophilia." "And that’s the Church’s attitude: 'We’re here, we’re queer, get used to it,' which is fine, far be it from me to criticize religion."

Following a profanity-tinged one-liner concerning the raid on the Texas compound of Fundamentalist Church of Jesus Christ of Latter Day Saints, Maher quipped, "In fact, whenever a cult leader sets himself up as God’s infallible wingman here on Earth, lock away the kids. Which is why I’d like to tip off law enforcement to an even larger child-abusing religious cult. Its leader also has a compound, and this guy not only operates outside the bounds of the law, but he used to be a Nazi and he wears funny hats. That’s right, the Pope is coming to America this week and ladies, he’s single!" ...

http://newsbusters.org/blogs/matthew-balan/2008/04/14/bill-maher-pope-used-be-nazi-compares-church-cult-bear-stearns
Posted by Alex Constantine at 11:01 AM