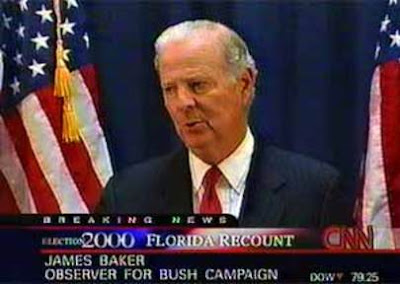 Former Secretary of State James A. Baker III watches Monday as cadets pass during a review at the U.S. Coast Guard Academy in New London.

New London — The jury is still out on what will come of the war in Iraq, former Secretary of State James A. Baker III told cadets at the U.S. Coast Guard Academy Monday, but his opinion on a next move for the United States was clear.

“We cannot pick up and come out of there,” said Baker, who delivered the academy's annual Hedrick Fellow Address and answered questions from cadets.

Baker served as secretary of state under President George H.W. Bush and held high-level positions in the administrations of both Ronald Reagan and Gerald Ford. More recently, in 2006, he served as co-chairman of the Iraq Study Group, a bipartisan, blue-ribbon panel on Iraq.

The Iraq Study Group's recommendations have, so far, been heeded: that there should be no precipitous withdrawal of troops; that U.S. officials not set a date for withdrawal, which Baker said would give away strategy and tactics to the enemy; and that there be a substantial American military presence in Iraq for a long time.

Baker, who has endorsed Republican Sen. John McCain of Arizona for president, said the next commander in chief will determine the future of the war.

“Iraq has shown the limits of our military strength,” he said, later explaining that conflicts today no longer produce the “astounding, blitzkrieg victory” the United States wants.

Responding to questions from cadets, Baker said he supports the embargo on Cuba until the country's leaders show that they have allowed Cubans just a “smidgen” more freedom.

He also supports what he called a very controversial solution to U.S. border security. A tamper-proof national identity card, Baker said, would identify those who are in the United States legally and those who are not. Immigrants would not come here illegally because they would know they couldn't get a job, he said.

“It would cure our immigration problems, I'll tell you that,” Baker said.

The United States depends on labor from Mexico and other countries, however, so laws should not be made to keep people out altogether, he said.

Baker injected a bit of humor into the talk, telling stories of Ronald Reagan at one cadet's request. Baker was Reagan's chief of staff from 1981 to 1985 and secretary of the Treasury from 1985 to 1988. He also served as undersecretary of Commerce under Gerald Ford.

Baker, who traveled to 90 foreign countries during his tenure as Secretary of State in the post-Cold War era, detailed his own rules for dealing with global challenges of the future.

The United States must be comfortable using its power while recognizing that power is limited, he said. It must appreciate the importance of allies, but be prepared to act unilaterally. It also sometimes must deal with authoritarian regimes and talk to its enemies, he said; it must be prepared to change course.

Promoting democracy and free markets can sometimes be a mixed blessing, Baker said, as elections do not always produce stable regimes. Domestic support is vital to good foreign policy, he added.