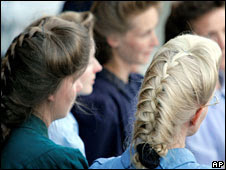 AUSTIN — Dozens of children seized from a West Texas polygamist sect had broken or fractured bones in the past and some of the boys may have been sexually abused, state officials said today.

Medical exams indicate that at least 41 of the 463 children in state custody had previous broken or fractured bones, Carey Cockerell, head of the Texas
Department of Family and Protective Services, told a Senate panel this morning.

"Specifics about the investigation are confidential in order to protect the privacy of the children and others," Cockerell said. "But I can tell you generally, we are further investigating the following findings: historical physical injuries and fractures that we have found via medical exams and medical record review.

Several of these fractures have been found in very young children and several had multiple fractures."

Most of the information about the fractures was reported to Child Protective
Services by the children or their mothers. Few X-rays have been done on the
children, agency officials said.

In a written update provided to lawmakers today, the state CPS division says it is looking into possible sexual abuse of boys, based on interviews and journal entries.

"We are also following up on discussions with young boys regarding sexual
abuse," Cockerell said.

For the past month, child welfare investigators had focused nearly all of their attention on the alleged sexual abuse of young girls who once resided with their parents at the Yearning for Zion Ranch outside Eldorado, alluding only occasionally to suspected physical abuse.

This is the first time state officials have provided specific information on what might be considered physical abuse and indicated that boys were sexually abused, too.

No other details were available about the possible abuse of the boys or how
many of the fractures, which affect less than 10 percent of the total child
population from the sect, can be attributed to their life on a large ranch with a large amount of construction and farm equipment.

It was not clear how many of the children might have been injured while playing or working on the 1,700-acre ranch they once called home.

Cockerell made the statements before the state Senate Health and Human
Services Committee's hearing on Texas' foster care system.

Earlier this month, the state seized all 463 children from the ranch amid
allegations that underage girls were being "spiritually married" to much older men and sexually abused.

The followers belong to a breakaway Mormon sect that practices polygamy. It is known as the Fundamentalist Church of Jesus Christ of Latter Day Saints. The children have been placed in group homes and shelters around the state.

Parker said any broken bones would have been treated in medical facilities away from the ranch in Eldorado and that doctors are required to report suspected abuse.

Parker said state officials were "trying to politically inoculate themselves from the consequences of this horrible tragedy."

On Monday, CPS announced that almost 60 percent of the underage girls from the Eldorado ranch are pregnant or already have children. Another child was born to a teen mother on Tuesday.

CPS officials have said that determining ages has been one of the agency's
biggest challenges. The agency reached the 53 total after reclassifying 26 girls, who had been considered older than 18, as younger than 18.

Stephanie Goodman, spokeswoman for the state's Health and Human Services Department, said those girls were reclassified after telling officials they were younger than 18.

''For most of these children, we've been given different ages and different
names," Goodman said. ''We have teenagers who can't tell us their birthdates.

Some have answered (that) they don't know. Others have said 'I'm not supposed to tell you.' "

Under Texas law, children under age 17 generally cannot consent to sex with an adult. A girl can get married with parental permission at 16, but none of the sect's girls is believed to have had a legal marriage under state law. The Associated Press contributed to this report.

http://www.chron.com/disp/story.mpl/life/religion/5742558.html
•••
Also see" "Most girls from sect's ranch in Texas either pregnant or are mothers", International World Herald
Posted by Alex Constantine at 12:54 PM