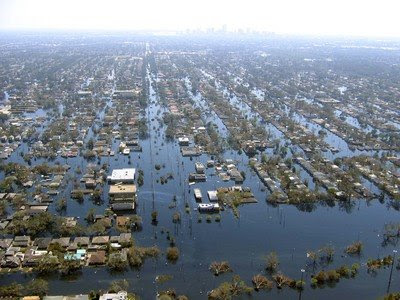 Today President Bush signed amendments to executive orders that he had previously made relating to the Robert T. Stafford Disaster Relief and Emergency Assistance Act. The amendments alter the chairmanship of the council in charge of the recovery effort from the assistant to the President for Economic Policy to the assistant to the President for Homeland Security and Counterterrorism. ...

This signals a somewhat more military approach to the situation in New Orleans and a departure from Economic assistance. These amendments also correspond with the alarming John Warner National Defense Authorization Act of 2006, which gave the President the discretion to describe a national emergency as terrorist attacks, natural disasters and the threat of any such attacks. The Act pulls control of FEMA directly under the Presidency, gives him the authority to declare martial law and to take charge of the US National Guard without the authority of the state Governor.

The amendments also extend the timespan of the created council until January 2009.

The post of assistant to the President for Homeland Security and Counterterrosim is traditionally (within the Bush administration at least) the one in which preparations for the possibility of the implementation of Continuity of Government (COG) are made. Former assistant Frances Fragos Townsend was National Continuity Coordinator, a position created under National Security Presidential Directive 51, the precursor to the John Warner Act.

The current holder of the post is Kenneth Wainstein. Wainstein was pivotal in the creation of the new National Security Division within the Justice Department, which was created under the reauthorization of the Patriot Act in 2006. Wainstein is a proponent of changing of the FISA law to allow wiretaps without proper legal authorization.
http://http://www.motherjones.com/mojoblog/archives/2008/03/7473_fisa_and_total.html

The passing of authority on this council from an economic to an intelligence assistant to the Presidency should be treated with alarm. The original Stafford Act was set up to provide economic assistance to an effected area, not to oversee the subversion of the area in a time of crisis by an increasingly powerful executive.

Too frequently do orders such as these slip under the fence. I have added the rss feed from the White House to my reader so that I can stay on top of these.

Feb. 15 Executive Order: Providing An Order of Succession Within the Department of Health and Human Services
Feb. 13 Executive Order: Blocking Property of Additional Persons in Connection with the National Emergency with Respect to Syria

I am not suggesting that any plan for the implementation COG is in any way immanent, but it appears that preparations for the possibility of its use are underway.

As pointed out by Professor Peter Dale Scott in his book ‘The Road to 9/11′, Continuity of Government is not an accurate definition, it is rather a determination of the constitution and of the elected representative system.

The Amendments can be seen here:

The original Executive order can be seen here: