Hugo Chavez Vows to Bury the Fascists of the U.S. Empire in the 21st Century 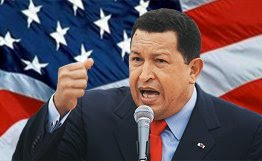 "When Americans appear with their fleet - the George Washington - near our shores, then one must not forget, that this is happening at a time when, together with Brazil, we are establishing a defense council in South America," he told a public meeting.

"This century, we will bury the old U.S. empire and will live with the American people as brothers, as over 40 million U.S. citizens live on the edge of poverty," the president said.

He also said that Latin America had entered a new era, marked by the creation of a bloc of leftist governments, which included Argentina, Bolivia, Cuba, Venezuela, Ecuador, Nicaragua, Chile and Brazil.

Unitas is 49-year-old annual exercise which aims to train participating countries' navies to operate as part of a multinational force employing a variety of maritime scenarios. Argentina and Brazil are also taking part in the naval exercise with Chile and Ecuador acting as observers.

The USS George Washington left its home port of Norfolk in the U.S. en route to its eventual new home in Yokosuka in Japan, where it will replace the USS Kitty Hawk.