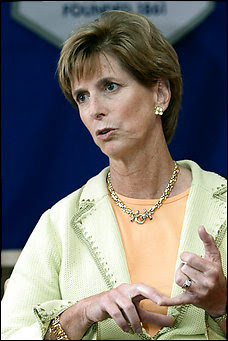 NEW YORK, April 22 -- Christine Todd Whitman, the former head of the Environmental Protection Agency, cannot be held liable for assuring residents near the burning detritus of the World Trade Center after the 2001 attacks that the air was safe to breathe, a federal appeals court ruled Tuesday.

Because Whitman did not intend to cause harm, a panel of judges on the U.S. Court of Appeals for the 2nd Circuit said, her message did not "shock the conscience" to the degree necessary to waive her immunity as a federal official.

The residents, students and office workers say Whitman should be forced to pay damages to properly clean homes and schools and create a fund to monitor health. They are considering an appeal, their lawyer said.

"These residents, workers and students continue to get sicker and sicker, and that's what makes this decision so tragic," said Joel Kupferman, co-counsel for the plaintiffs.

Whitman, who has always maintained that her agency acted responsibly, said in a statement, "I am pleased that the court today confirmed what I have said -- that we at the EPA acted reasonably and made every effort to protect the people of New York."

Her attorneys had argued that holding Whitman personally liable would prevent officials from speaking to the public in future crises.

Three days after the attacks of Sept. 11, 2001, Whitman told reporters, "The good news continues to be that air samples we have taken have all been at levels that cause us no concern."

And on Sept. 18, 2001, she reassured residents that their air "is safe to breathe and their water is safe to drink." Whitman later testified in congressional hearings that she was talking about the air of Lower Manhattan generally, not Ground Zero specifically.

Soon after, many residents went back to their homes without properly cleaning them, they later reported.

"She caused thousands of residents, workers and first responders to suffer injury and, in some cases, death, due to unnecessary exposure to toxins released by the collapse of the World Trade Center buildings," said Rep. Jerrold Nadler (D-N.Y.), who held hearings on the federal government's management of the crisis at which Whitman testified.

The EPA's inspector general criticized the agency's handling of the crisis in a 2003 report, which found that the EPA had no basis for its pronouncements about air quality.

In February 2006, U.S. District Judge Deborah A. Batts allowed the lawsuit against Whitman to proceed and called Whitman's actions "conscience-shocking."

"No reasonable person would have thought that telling thousands of people that it was safe to return to Lower Manhattan, while knowing that such return could pose long-term health risks and other dire consequences, was conduct sanctioned by our laws," she wrote.

Activist residents said they were upset with Tuesday's decision.

"The judgment today seems like carte blanche to allow government environmental officials to put people in harm's way with little or no accountability," said Craig Hall, 39, president of the World Trade Center Residents Coalition, whose members said their children suffered coughs, eye irritations and nosebleeds after the attacks.