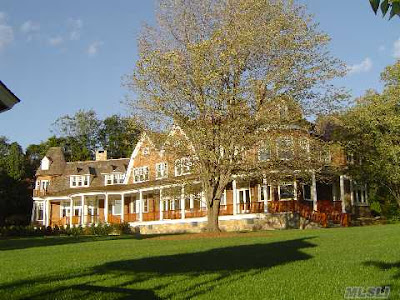 Conservative talk show host and Long Island native Sean Hannity is in contract to purchase a 16-room Centre Island Colonial mansion, real estate sources tell RealLI. The home is currently listed under a trust named “2002 JLD Childrens,” which was set up after a transfer of the property from Deborah Dolan, ex-wife of Cablevision chief executive James L. Dolan.

Hannity, who grew up in Franklin Square and delivered Newsday as a boy, now lives in Lloyd Harbor. The new home in Centre Island is not far from one that his Fox News boss, Rupert Murdoch, has on the market for $12.8 million. Billy Joel is also trying to sell his mansion, which has an asking price of $32.5 million.

The Hampton-style house was built in 2005, and includes seven bedrooms, 7 1/2 baths, seven fireplaces, lighted tennis courts and a gunite pool. The property sits on 6.22 acres and includes 500 feet of water frontage. The taxes are $94,526 per year. The home is listed with Peggy McCormack of Daniel Gale Sotheby's International Realty.

The latest listing price is $10.5 million.

Hannity's publicist declined to comment. McCormick and Regina Rogers of Prudential Douglas Elliman Real Estate, who is supposedly representing Hannity in the deal, could not be reached for comment.

In the meantime, the NY Radio message board is abuzz that Hannity might be leaving ABC Radio in the next 60 days. "He apparently is building a home studio and may do the show from there via a different syndicator such as Fox," according to a post. That studio is being built at the Centre Island home, a real estate source tells RealLI. "He is supposed to close in about a week and a half, but isn't going to move in until he builds a studio on the property," the source says.

http://weblogs.newsday.com/realestate/blog/2008/04/sean_hannity_in_contract_to_bu.html
Posted by Alex Constantine at 11:59 AM