The Nazi Origin of the Olympic Torch Relay 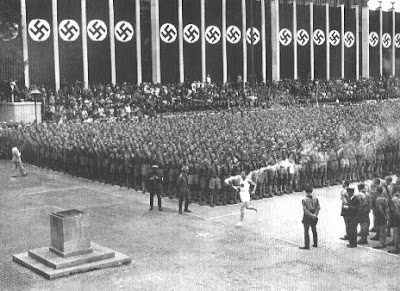 What the torch is really a symbol of

At noon, 15 maidens entered the ruins of an ancient Greek stadium at Olympus. Using a concave glass reflector, they focused the sun's rays on a bundle of sticks which burst into flame. Solemnly, they carried the fire across the field and lit an oil-filled brazier. Grand speeches were made. A torch was dipped into the brazier and lit. A runner took hold of it and set off to deliver it to another, who would do the same, until the torch finally arrived in the new Olympic stadium where the games would be held.

This could have been two weeks ago, when the flame for the 2008 Beijing Olympics was lit in an almost-identical ceremony. But it was July 20, 1936. The Olympics that year were held in Berlin. The reflector, brazier and torch used in the torch-lighting ceremony had been made in Nazi Germany. So was the ceremony itself.

Allegedly a restoration of an ancient Greek tradition, the torch relay and accompanying fanfare was actually conceived and composed in Germany's Ministry of Propaganda. Nazis loved torches; at nighttime rallies, storm troopers would march flames clenched in their fists, their faces stern and glowing.

Writing on The Gazette on Saturday, longtime International Olympic Committee member Dick Pound called the torch "a symbol of international peace and friendship," but that's not what the torch's creators envisioned. It is "a symbol of purity," declared Carl Diem, the chief of the Berlin games. Even more than torches, Nazis loved purity.

What the Nazis did not love, at least not originally, was the Olympics. When Pierre de Coubertin invented the Olympic Games at the end of 19th century - or "restored" them, as the official mythology has it - he put international amity at the heart of his vision. Nations would compete, yes. But they would also come together. And the competition would be fair, peaceful and open to all. Even Jews and blacks would be allowed. For fascists, racists and other ultra-nationalists, this reeked of liberal cosmopolitanism and they wanted nothing to do with it.

Nazi contempt for the Olympics became a burning issue when Adolf Hitler came to power in 1933. Two years before, many International Olympic Committee members had supported Berlin's successful bid for the 1936 games as a gesture of support for Germany's struggling democracy. Now the man who was strangling the life out of that democracy would decide the fate of the Games. The IOC held its collective breath.

They needn't have worried. The Olympics offered a global stage. With control of the Games, the Nazis could put on a show of power and pride that would consolidate support at home and project strength abroad. "No other event can even remotely match (the Olympics) in terms of propaganda value," a German Olympic Committee official told Hitler when the Nazis' support was still in doubt.

Hitler might have been a racist madman but he was no fool. He embraced the Olympics and his propaganda ministry got busy. "The torch relay was but one of many ways in which the Nazi games helped define the modern Olympic experience as we know it today," argues historian David Clay Large in Nazi Games, a superb and enlightening history of the Berlin Olympics.

The parallels with the Beijing Olympics are many. Even last week's headlines seem eerily foreshadowed.

Scuffles broke out at the Bulgarian-Yugoslav border as the torch was passed and ethnic Germans in Yugoslavia seized the moment to declare their fealty to Germany.

In Austria, local Nazis pushing for union with Germany shouted down the president at an Olympic ceremony and attempted to block the vice-chancellor from passing the torch on to the next relay point. "I felt I should never get through," the vice-chancellor recalled. "The light of the streetlamps fell upon faces filled with hatred and distorted by shouting."

This was awkward for the Germans. "Realizing that the Vienna demonstration could undercut Germany's deeply disingenuous official stance that the 1936 games stood 'entirely above politics,'" writes Large, "propaganda minister Joseph Goebbels ordered the German press not to play up the Austrian demonstration and to comment that 'the use of the Olympic flame for political purposes is exceptionally regrettable.'"

Then it was on to Czechoslovakia, where the wild enthusiasm of ethnic Germans fuelled hostility among their Slavic countrymen. "Although Czech president Edvard Benes gave his personal support to the venture, it occasioned so much animosity among the Czechs that the runners passing through the Slavic portions of the country had to be protected by police escort."

Finally arriving in Germany, the torch lit the fires of ecstatic nationalism exactly as the Nazis had intended. "Holy flame, burn, burn, and never go out," intoned Joseph Goebbels.

The opening ceremony of the Berlin Olympics dwarfed all that had come before it, with choirs and performers numbering in the thousands. It was an overwhelming spectacle, reported the New York Times, "the most ambitious and, in the opinion of many, the most beautiful pageant every attempted in any land."

The Nazis were pleased. "A beautiful day, a great day," wrote Joseph Goebbels in his diary. "A victory for the German cause."