Was Jeremiah Wright's Speech Set Up by a Clinton Supporter?/Dr. Barbara A. Reynolds on the ML King Murder Conspiracy 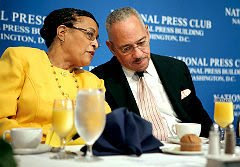 Well, here's a most interesting connection we just came across.

Everybody is talking today about how much the Rev. Jeremiah Wright's latest unrepentant militant remarks hurt his most prominent parishoner, Sen. Barack Obama, and his chances to win the Democratic presidential nomination and the general election. So much so that the Obama camp realized the latent danger overnight and the candidate was forced to speak out publicly a second time today, as The Ticket noted here earlier today.

There was little doubt left in today's remarks by Obama, who recently said he could no more disown Wright than he could the black community. He pretty much disowned Wright today. Obama described himself as "outraged" and "saddened" by "the spectacle of what we saw yesterday."

But now, it turns out, we should have been paying a little less attention to Wright's speech and the histrionics of his ensuing news conference and taken a peek at....

who was sitting next to him at the head table for the National Press Club event.

It was the Rev. Dr. Barbara Reynolds, a former editorial board member of USA Today who teaches at the Howard University School of Divinity. An ordained minister, as New York Daily News writer Errol Louis points out in today's column, she was introduced at the press club event as the person "who organized" it.

But guess what? She's also an ardent longtime booster of Obama's sole remaining competitor for the Democratic nomination, none other than Sen. Hillary Clinton of New York. It won't take very much at all for Obama supporters to see in Wright's carefully arranged Washington event that was so damaging to Obama the strategic, nefarious manipulation of the Clintons.

Their supporter, Reynolds, helps arrange a speech by the outspoken and egocentric Wright which receives blanket national coverage to the disadvantage of Clinton's opponent. As Louis writes: "The Rev. Jeremiah Wright couldn't have done more damage to Barack Obama's campaign if he had tried. And you have to wonder if that's just what one friend of Wright wanted."

Reynolds has not returned e-mails or phone calls seeking comment, but Louis notes the obvious conflict between her political allegiance and her press club arrangements. He quotes a February blog entry of Reynolds saying, "My vote for Hillary in the Maryland primary was my way of saying thank you" to Clinton and her husband for his administration's successes.

In another entry, Reynolds notes critically of Obama, "It is a sad testimony that to protect his credentials as a unifier above the fray, the senator is fueling the media characterization that Rev. Dr. Wright is some retiring old uncle in the church basement."

Louis notes himself about the Wright appearance: "It's hard to exaggerate how bad the actual news conference was. Wright, steeped in an honorable, fiery tradition of Bible-based social criticism, cheapened his arguments and his movement by mugging for the cameras, rolling his eyes, heaping scorn on his critics and acting as if nobody in the room was learned enough to ask him a question."

(UPDATE: Sylvia Smith, the press club president, confirmed today that Reynolds is on the club's speakers committee. She told Michael Calderone on Politico.com that she still doesn't know whom Reynolds supports for president, adding, "Rev. Wright is newsworthy, period.")

And when his brothers saw him they said one to another, "behold the dreamer cometh," come now and slay him…and we shall see what will become of his dreams. (Genesis 37:18-20)

I have given lip service to the unprecedented saga of Senator Barack Obama to become president of the United States, but not my heart-felt support. I wonder is it because I have seen so much tragedy confront our big dreamers, especially African-Americans, that like a mother to a son I have to curb my enthusiasm.

In a few days we commemorate not only the assassination of Dr. Martin Luther King Jr. at the Lorraine Motel in Memphis, but also the mysterious death and possible assassination of the first black Commerce Secretary Ron Brown. On April 3, 1996, on the eve of Dr. King’s murder-- some 28 years before-- Brown’s plane went down, along with 34 others, on a mountaintop in Croatia.

Not only have these two great men been taken from us, but also the historic memory of why they died, how their dreams have been twisted and what does all of this portend for the next Big Dreamer.

If Dr. King and Brown were only dreamers, they would have been alive today. Dr. King was one of the 20th century’s greatest prophets, a man who had the skills to analyze, organize and activate. The King movement showed first the victims and then the victimizers that the way U.S. blacks were forced to live under a reign of terror, without dignity nor democracy, was a sin and a scandal.

King and the movement reordered traditional social relationships. That meant no longer would blacks, browns, women, the handicapped or any other group accept the status of a valueless nobody without a fight. And this vision of equality was translated into a world-view that challenges this nation’s concept of a global superiority that permits it to invade other countries to steal their resources and subjugate their people.

King, the activist, is not the King that the media serves up ever King holiday that has him sleepwalking through history. The King the media has created could be used in ads for mattresses: "Come buy the King mattress and you too could have a dream."

King in his prophetic mission did not always use somnambulistic language, but fiery challenges, not much different from the spirited sermons of Pastor Jeremiah Wright. King often quoted the Negro fight song that "before I be a slave, I’ll be buried in my grave and go home to my Lord and be free."
King’s militant non-violent context resulted in his death. Unfortunately as we commemorate his death, the nagging questions surrounding it, as well as that of Brown, remain. For example:

Why were the two black firemen who watched over Dr. King when he was in Memphis transferred from their post the evening before the killing?

Why has the sworn testimony of Lloyd Jowers been ignored? Jowers, who owned Jim’s Grill across from the Lorraine Motel, said he was offered $100,000 from a Mafia businessman to set up the killing of King in which a patsy (James Earl Ray) would be provided. Jowers said after the shooting, he took the "smoking rifle," from the hit man, who was not Ray.

Why has Rev. Walter Fauntroy, the former delegate from the District of Columbia, who was on the sub-committee of the King assassination panel, maintained: "The assassination was a conspiracy involving operatives in our intelligence agency, including the military, along with the Mafia and corporate interests."

In the case of Brown, two weeks before his plane crashed, he called me to his office to observe a new plan of action, which he felt would drastically change the plight of Africa, by launching a new program based on trade not aid.

Brown, too, was a big dreamer whose dreams would have benefited people of color globally. Few people these days mention him nor is there any action to investigate why forensic pathologists stepped forward and put their careers on the line to say that Brown’s skull had a hole that resembled a bullet wound. Yet, to my knowledge there has been no independent autopsy and neither are the media or civil rights groups clamoring for it.

No credible explanations were ever given to why there were no cockpit recorders aboard the government aircraft, why an experienced pilot was replaced by someone with lesser experience and why the maintenance chief at the airport where Brown’s plane crashed, was found dead before U.S. investigators reached him, reportedly from a self-inflicted wound.

If Obama becomes the first black president, this would mean a black man would be commander- in -chief of the most lethal superpower on the globe. In addition under his administration, he could influence world trade, the global financial markets, the course of the Middle East and shape the direction of the U.S. Supreme Court.

Even more important, Obama would possibly be privy to all or most of the United States dirty secrets.

At least two other African-Americans who stepped on or into the power stream of the United States were taken out.

As the nation commemorates Dr. King, I can’t help but worry if the rulers of a nation built on the foundation of white supremacy will once again see the dreamer coming.''

And then would they slay him?

Dr. Barbara A. Reynolds, an ordained minister, is author of several books, including NO I Won’t Shut UP, is an adjunct professor at the Howard University School of Divinity and a religion columnist for the National Newspapers Publishers Association.