For 24 years Elisabeth Fritzl and three of her children lived an isolated life in three tiny underground chambers, deprived of natural light and room to move around freely.

The rest of the Fritzl family lived in the house upstairs and had been forbidden by the domineering Josef Fritzl from ever going into the cellar, where the dungeon was.

The secret location was so well hidden that when the police searched the property they failed to find it until Mr Fritzl showed them where it was.

The dungeon is entered via a narrow passageway leading into rooms that include a cooking area and shower facilities, with children's drawings on the walls.

The cellar rooms cover an area of approximately 60 sq m (650 sq ft).
They are reached through a massive reinforced concrete door which was hidden behind a shelf in Mr Fritzl's workshop, which was in the cellar under the family house.

ORF, Austria's public broadcaster, reports that the workshop and cellar area was strictly off limits to the Fritzl family members who lived upstairs.

The secret door was electronically locked and could only be opened with a special code and a remote control - which Mr Fritzl is reported to have carried with him at all times. 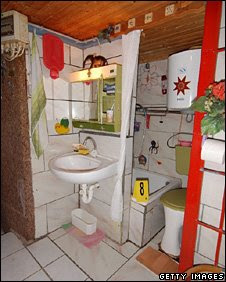 The tiny rooms were decorated with pictures and personal belongings

A narrow corridor, five metres long, leads to an area which includes cooking facilities and a small bathroom with a shower. The floor is uneven and bumpy. A tube provided ventilation.

Police said there were also two bedrooms - each containing two beds. At least part of the dungeon appeared to be padded and well sound-proofed.

Police have refused to circulate pictures of the victims' sleeping areas or possessions to the press, saying they wished to protect their privacy.

The rooms are described as being neat and tidy. There are no windows. The three children who lived in the cellar, 19-year-old Kerstin and her two brothers aged 18 and five, had never seen daylight, and grew up with artificial light.

They had no fresh air and no room to exercise or run around. Hospital officials said the lack of oxygen may have contributed to Kerstin's illness.

She remains in a critical condition. Police described the two boys as very pale, small and weak. 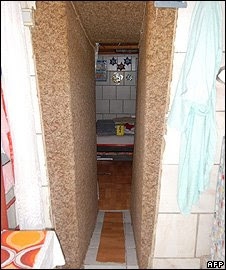 Children's paintings and posters were hung on the walls. Police say there was a television with a video player and a radio.

All of Elisabeth's seven children were born in the dungeon without medical supervision. One died shortly after being born. As Mr Fritzl's secret family grew, he began to enlarge the dungeon. Police say it is still unclear how he managed to carry out this construction work secretly, as well as deliver food and clothing to Elisabeth and the three children without being noticed.

They believe the underground dungeon was originally one room, equipped only with washing facilities, which was gradually enlarged over the years. It is thought Mr Fritzl may also have expanded under the house's garden.

Mr Gruber said inspectors examined the project in 1983 - the year before Elisabeth went missing - and did not notice anything suspicious, but that he believed Mr Fritzl had not stuck to the original plans but had secretly expanded the cellar area.

According to the German magazine "Bild" supposedly the children were not physically abused, but I personally find that really hard to believe.

I think this might be a outright lie--first, because I think since the kids are so young, the authorites want to prevent further trauma in their lives by revealing such horrid facts.

Secondly--if ---and I admit to total speculation here----if there was multi-generational abuse or organized abuse/pedophile abuse for profit crimes taking place, they may not want to admit it, because it would lead to the obivous questions about similarites to the the Kampusch case in Austria, and the Belgian Dutroux affair.

Whether these are simply speculations or not--I don't think the Austrian government wants to discuss such things in a already disturbing case.

also, as Bild has already reported--everyone, inculding authorities, are speculating about accomplices. It is very hard for people to believe this guy was able to expand his basement, install soundproofing, and install a high tech remote controlled door by himself.

also according to Bild--this guy has a criminal background!!! Apparently back in the 60's he was convicted of a sexual offense of a woman in Linz, Austria----yet, this was never brought up when years later, his own daughter goes "missing"????

Now--my german isn't 100% but it's pretty damn close, so if I have mistated anything, please feel free to correct me!!!

Here is the link to the extensive Bild Magazine converage of this crime:

and here is some info about the Kampusch case--very interesting she refuses to discuss if she was sexually abused or if her mother was involved in the kidnapping.....