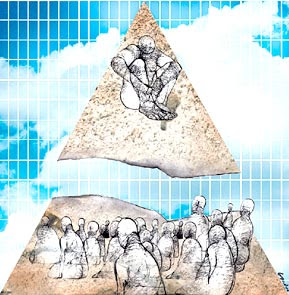 (Russell Mokhiber and Robert Weissman are co-authors of "Corporate Predators: The Hunt for MegaProfits" and the "Attack on Democracy." Their website is www.corporatepredators.org.)

In the August 7, 2003 edition of the Washington Post, Condoleeza Rice, the president’s national security advisor, writes the following:

"Our task is to work with those in the Middle East who seek progress toward greater democracy, tolerance, prosperity and freedom. As President Bush said in February, ‘The world has a clear interest in the spread of democratic values, because stable and free nations do not breed ideologies of murder. They encourage the peaceful pursuit of a better life.’ "

Now, if we only had a nickel for every time Bush, or Rice, or Colin Powell, or Paul Wolfowitz, or Dick Cheney, or Richard Perle, or Donald Rumsfeld talked about bringing democracy to the Middle East.

That was 50 years ago this month, in August 1953. That’s when Mossadegh was fed up with the Anglo-Iranian Oil Company—now BP—pumping Iran’s oil and shipping the profits to the United Kingdom.

And Mossadegh said, hey, this is our oil. I think we’ll keep it.

And Winston Churchill said, no you won’t.

Mossadegh nationalized the company—the way the British were nationalizing their own vital industries at the time. But what’s good for the UK ain’t good for Iran.

If you fly out of Dulles Airport in Virginia, ever wonder what the word, "Dulles" means? It stands for the Dulles family: Secretary of State John Foster Dulles and his brother, the CIA director, Allen Dulles. They were responsible for the overthrow of the democratically elected leader of Iran. As was President Theodore Roosevelt’s grandson, Kermit Roosevelt, the CIA agent who traveled to Iran to pull off the coup.

Now, why should we be concerned about a coup that happened so far away almost 50 years ago this month? New York Times reporter Stephen Kinzer puts it this way:

"It is not far-fetched to draw a line from Operation Ajax through the Shah’s repressive regime and the Islamic revolution to the fireballs that engulfed the World Trade Center in New York."

Kinzer has written a remarkable new book, All the Shah’s Men: An American Coup and the Roots of Middle East Terror (Wiley, 2003). In it, he documents step by step, how Roosevelt, the Dulles boys and Norman Schwarzkopf Sr., among a host of others, took down a democratically elected regime in Iran.

They had freedom of the press. We shut it down.

They had democracy. And we crushed it.

We asked Kinzer, what does the overthrow of Mossadegh say about the United States’ respect for democracy abroad?

"Imagine today what it must sound like to Iranians to hear American leaders tell them, ‘We want you to have a democracy in Iran; we disapprove of your present government; we wish to help you bring democracy to your country.’ Naturally, they roll their eyes and say, ‘We had a democracy once, but you crushed it,’ " he said.

"This shows how differently other people perceive us from the way we perceive ourselves. We think of ourselves as paladins of democracy. But actually, in Iran, we destroyed the last democratic regime the country ever had and set them on a road to what has been half a century of dictatorship."

After ousting Mossadegh, the United States put in place a brutal shah who destroyed dissent and tortured the dissenters. And the Shah begat the Islamic revolution.

During that Islamic revolution in 1979, Iranians held up Mossadegh’s picture, telling the world, we want a democratic regime that resists foreign influence and respects the will of the Iranian people as expressed through democratic institutions.

"They were never able to achieve that. And this has led many Iranians to react very poignantly to my book," Kinzer told us. "One woman sent me an email that said, ‘I was in tears when I finished your book, because it made me think of all we lost and all we could have had.’ "

Of course, the overthrow of Mossadegh was only one of the first U.S. coups of a democratically elected regime. (To see one in movie form, pick up a copy of Raoul Peck’s Lumumba now on DVD.) ...

The the next time a politician talks about spreading democracy around the globe, ask them about Mohammed Mossadegh in Iran, Patrice Lumumba in the Congo, and Jacobo Arbenz in Guatemala.